to stuff or not to stuff: that WAS the crowstion 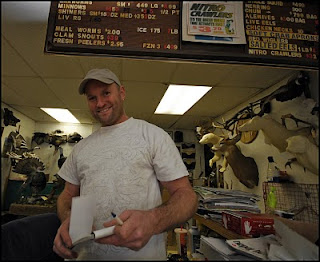 For most people, a dead crow in the grass is hardly a jackpot. It would more likely elicit a shiver of revulsion and a step back, rarely a second glance, hardly a second thought. Those who might linger over its body are among an elite group: five-to-ten-year-old boys, devil worshippers, scientists. And me.

That said, it’s hard to argue for going beyond rolling the thing over with a stick, snapping a few quick photographs, marveling at the shape of its feet, noting they are, indeed, like the lines around my eyes. I could, as my husband and daughter would, bury it in the yard and examine its bones later; bones are cool. The reasons to choose the bones over the body are rational ones: I’m underemployed and broke; our house is cluttered with things; this is not something I need, like a prescription refill or a computer repair; taxidermy is a bizarre art. And do we really want to have a harbinger of death staring down at us? 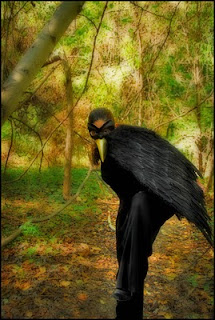 1.) I have given up my 4:00 beer, my weekday ale, thereby reducing the amount of money I drink from a cold pint glass by at least $10 a week. This crow is the new beer.

2.) Writers gather experiences about which to write; the most resourceful of us hope to parlay those words into publication, paying publication. This crow is my experience.

3.) Photographers are always in the market for models. This crow is my model.

4.) Things—jewelry, instruments, art—can’t make us happy, but they can certainly provide us with diversion from our problems. This crow is my diversion.

5.) I collect crows. I study them, I read about them, I take pictures of them. They are in my stories, essays, and poems. I have crow coasters, two crow puppets, crow statues, a set of wings, wall decals. I have t-shirts and masks and feathers. My first poetry chapbook was called Croetry (I sold it on my blog). This crow is the feather in the cap of my collection.

6.) My mother’s brother, who’d be known as my uncle had he uncle’d me any time in the past three decades, is a trophy hunter. He hunts all kinds of exotic animals and has them stuffed to populate his frozen zoo. He confessed to me a few years ago that he has an electronic box that replicates crow calls, which he and his hunter friends used to lure crows to them for target practice. He has no crowphy, however. They are not such a prize. This crow is a totem to replace his irreverence with my love. 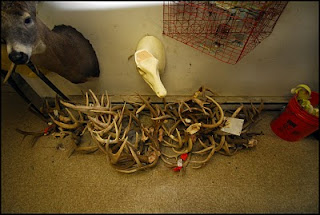 7.) One hour after the crow came to us, our old friend, John Guttierrez, a fabulous furniture designer and my brother-in-law’s employer, died after a brief battle with late-stage cancer. This crow is a symbol in loving memory.

8.) Crows saved my own life. For the months of my back surgery recovery, when I knew only pain, the black birds I usually visited on the hill at sunset came to me, stopping to pick fruit from the flowering crabapple tree in front of my house. For their brief visit, I stopped crying. This crow is, ironically, my choice to live.

9.) For all I know, I am a crow. I like shiny things. I squawk when I am not pleased. I look good in black. This crow is self-preservation.

10.) Cawpe diem. I’m forty-seven, and I have never before found an intact crow on the ground. This is the crow.

The answer is clear. And it is beautiful.
Posted by fuquinay at 9:24 PM 5 caws 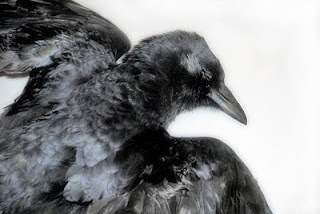 The dead crow is on my deck, on a snack table, in a box, in a black garbage bag, weighted down by a rusty metal vise. The whole package of crow and box and vise is partially covered by this morning’s snow.

While my husband and daughter were walking the dogs in the park yesterday, a fellow dog walker was looking for the keys he lost in the snow. Marty and Serena helped him look, and Steve eventually found them, so they headed back out of the park together. Steve put his dog on the leash and cautioned them about the dead crow that lay up ahead. Moments later, Marty and Serena were carefully rolling it into a discarded box with a stick while the walker looked on, incredulous. “What, are you channeling your inner ten-year-old?” Steve asked.

“Well, she’s either gonna be really pleased or really pissed off!”

After some bit of (probably) unsatisfactory explanation, my family came home. I was in the kitchen pondering dinner. “We brought you something,” Marty said, a gleam in his eye.

"You're gonna love it," Serena added.

As revealing as it is that a man would bring his wife a dead crow—her first and only crow, living or dead—it is equally telling that his wife could guess the surprise just by the expression on her husband’s face. I nearly cried with reverent delight. 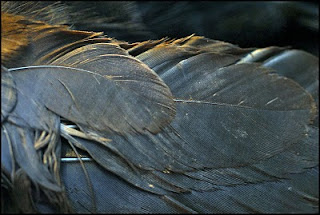 While Marty went back out to retrieve the frozen blackbird, I fetched some rubber gloves and my camera, set up a spot with the best light, and locked the dogs out of the kitchen.

I put on one of the gloves to pick it up and was surprised by its lack of weight. Still, the crow required two hands because of its size and its broken neck. The head and neck bobbed and flopped like a slinky. His eyes had disintegrated into crust; his beak was grained like wood. But his feathers were good as new, with a glorious kiss of red, and I imagined him flying over my house at sunset on his way to the park, wings glowing auburn in the last light.

Shooting the dead crow’s portrait was difficult. His wiggly neck made an upright pose impossible, and the kitchen’s dull yellow light added an artificial sickness. Too long inside and a moment of hot lights would have thawed him, and I wasn’t ready for the decomp to begin, so I let Marty pose him on some white foam core while I shot quickly and returned him to the cold.

Marty’s plan was to bury him in the yard, let him decompose, and dig him up later for the skeleton to add to our collection of rodent, fox, and deer skulls, turtle shells, and random bones of random beasts. But a skeleton has to be rearticulated, or it’s just another pile. “You could always try taxidermy,” Marty said, and before he could say another word, I was hunting down the maker of my trophy. 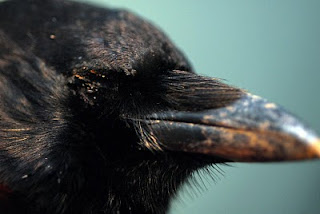 Having never priced taxidermy, I hadn’t a clue—three hundred bucks? A hundred? And what would be the most I’d pay, considering I have only outgo (and no income)? Naturally, taxidermists seem to set up shop in the wilderness—faraway Maryland counties with a hunting season—rather than in the middle of the city. But I found one willing to stuff my bird for a mere $120. It will take two months because this is the end of hunting season, and the shop is full of stuff to stuff.

Last night, my sleep was fitful. The wind rattled the windows and whipped around some stuff in the yard, and all I could think about was the bird—whether it would be ripped apart in the wind, whether some animal would get it, whether it would be covered with snow. I promised myself that if the crow remained intact overnight, I would get thee to taxidermy, and it did.

But my husband is squawking at the price, so while he showered, I prepared a list of reasons he should tell me to go ahead and stuff it.

(Next: To Stuff or Not to Stuff: That is the Question)

If you would like to help me pay for the taxidermy, I would be happy to exchange it for a 5x7 dead crow print of your choice, signed and numbered!

but ours is no cookie-cutter love 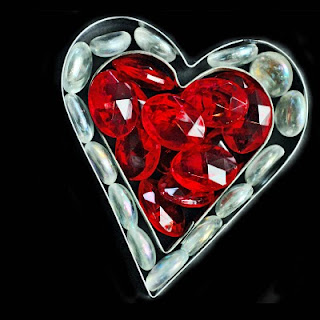 I can think of a few holidays I adore: Rosh Hashanah—for me, not just a dry run for the changing of the year but a day of peaceful bread kneading and self-reflection; Halloween—the crazy costumes, the school dances; and my birthday still rocks after forty-[inaudible mumbling] of them. But Valentine’s Day?

First, let’s dispense with the myth that this is an invented, á la Hallmark, holiday. The greeting card company turned 100 on January 10th, but Shakespeare was waaaaay older. Consider this:


To-morrow is St. Valentine’s Day.
All in the morning betime,
And I a maid at your window
To be your Valentine.


So sings the grief-stricken Ophelia shortly after Hamlet murders her dad, Polonius. I’m not quite sure what she meant by her cryptic song (she’s crazy, after all), but I do know this: Mr. Hallmark could have had nothing to do with the holiday known around these parts as “Valentimes, Hon!” 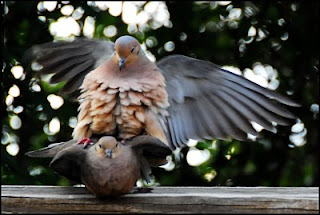 The legends of the love holiday’s origin are many and varied, but I like this one. Valentine was a priest in Rome in about 270 AD, when Christianity was not nearly as popular as it is now. In fact, he was jailed for it. On February 14th, when all attempts to make the priest renounce his faith had proved fruitless, Valentine was beaten with clubs and then beheaded. (You can see why I like it!)

So what’s love got to do, got to do with it? Coincidentally, February 14th was already a day associated with the mating of birds. The priest’s martyrdom merely provided a name for the annual celebration of avian booty.

Before Valentines were written (few peasants could read and write), they were sung. Perhaps to make his time of imprisonment move Allegrissimo in the Tower of London, Charles, Duke of Orleans (a Frenchman, naturellement), wrote down his song, giving birth to the first recorded Valentine’s day greeting in 1415.

Hundreds of years passed without any revolution in the love industry until 1847, when a Massachusetts woman named Esther Howland received her first decorated card from England. The Martha Stewart of her day, Howland began making her own lacy cards to sell in her father’s shop—an idea so successful that she earned almost $100,000 a year in the greeting card business!

While Valentine’s Day is not as old as Christmas, it’s been celebrated on this day for more than 1,700 years—longer than your birthday or your wedding anniversary. So why, on February 13th, is your husband ill-prepared to express his love in verse, with a side of flowers and chocolate? 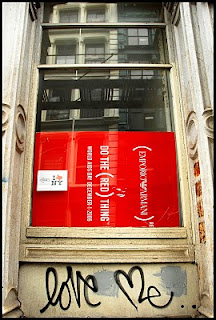 Though my father has flowers delivered or hands my sister, my mother, and me a certificate for a spa day every year, I can’t recall the last time I got a Valentine from my husband, who knows how much I love 70% cocoa and Gerbera daisies but who, in 1997, got me a book of poems by Ogden Nash. Yes, Ogden "Candy is dandy but liquor is quicker” Nash. Hardly a romantic gift. But we have other romantic days to celebrate, like the anniversary of our first date, December 16th, 1982, otherwise known as End All Rats Day (so named because the rats used in a Halloween display in the hippie mansion where we lived had found freedom and had to be eradicated by exterminator, December 16, 1980). 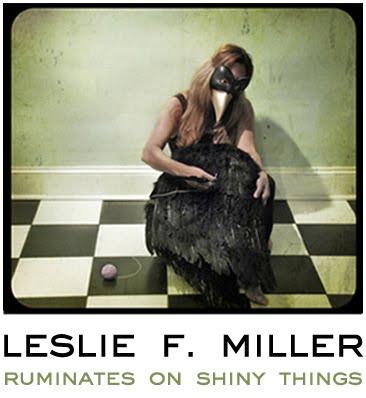 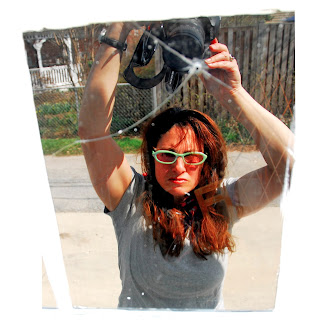 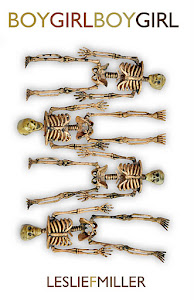